When you’re ready, our professional installers will handle every aspect of the installation of your new solar energy system, including permit documentation, rebate application processing, and interconnection with your electricity provider.  We feature tier 1 panels with industry leading power tolerance and the best price-to-performance ratio and fast return on investment.  When aesthetics are a key concern, ask about all black panels.

There simply is no better time to get PV solar for your home, business or commercial facility.  Commercial and residential solar installation incentives continue to drop in California and other states and experts believe the same

pattern will follow in Colorado.   Contact us today to get a Free Site survey and a proposal regarding solar for your property.

We can also provide Energy Audit services for commercial and residential buildings.   For Commercial locations, it can sometimes require outside help to fully understand the driving factors of your electric bill and particular rate structure.    Our test equipment can identify energy usage patterns over the course of several days to identify anomalies.

There are many non-financial sound reasons to install solar on your business or home now. Decreasing your carbon footprint, gaining energy independence and doing your part for a cleaner, brighter future are all great reasons to go solar. However, given the tax advantages and local incentives available, it could well be the safest, long-term investment return you can achieve … by a long shot.  When you consider these four driving investment principals, and review the math, a solar electric system may help you sleep better at night than you have in a long while. 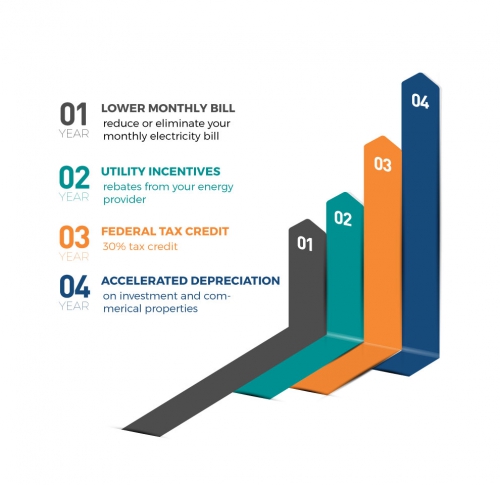 There is not a cap on this tax credit and it can be taken over several years!

If you were previously interested in taking advantage of the federal incentives offered to home and business owners who invested in solar power systems, but you missed the 2019 deadline, you’re in luck. Congress has since extended the Solar Investment Tax Credit (ITC) multiple times, most recently in December 2020. The ITC is now available at 26% through the end of 2022, meaning that owners of new residential or commercial solar power systems can deduct 26% of the cost of that system from their taxes provided it is up and running before the end of 2022. In 2023, the tax credit then steps down to 22%.

There are also several state solar incentives to take advantage of if you’re a new owner of solar power systems in Denver, CO, or throughout Colorado.

Are you on the fence about investing in solar? If so, consider the following.

As you can see, if you’re interested in residential solar power in Denver, CO, or anywhere in the state, the local and state governments are looking to help you out. And as the state aims to continue overcoming its reliance on non-renewable energy sources, you should see a lot more policies popping up intended to incentivize and encourage switching over to solar.

How does a solar power system in Denver work?

The basic premise of solar energy is, simply put, harnessing the naturally produced energy of the sun to provide electrical power for your home or business.

A typical solar energy setup consists of several solar panels, attached in an arrangement known as a “solar array.” A solar panel contains thousands of solar cells, each of which has a positive and negative end with conductors attached to both, turning each cell into a complete electrical circuit.

Whenever the sun’s photons strike a solar cell, electrons become dislodged from their atoms. These electrons then travel and flow through the electrical circuit of the cell, which in effect generates electricity.

The power a solar cell generates is DC electricity, also known as direct current. Since electric power grids employ AC electricity, the DC solar power must be transformed to make it operational on the site using solar energy. This is accomplished with a device called an inverter, which ensures that your site will always use solar energy as the first option for electricity.

Why a solar power system in Denver is important

When you obtain commercial or residential solar power in Denver, you’re using a process that produces several great advantages:

Calculating How Many Solar Panels You Will Need

If you’re looking to determine how much equipment you’re going to need to provide your home with solar power, there are a few things that you need to consider. Each home is built differently, each homeowner has distinct energy requirements, and each property receives a particular amount of sunlight. It can seem a bit overwhelming to calculate the number of solar panels you’ll need, but the equation is relatively simple. It does, however, require you to determine the following variables:

What to expect in solar power systems installation

The typical installation of solar energy, including the placement of solar panels and system setup, takes about one to three days. Steps typically include:

At that point, your house or office is ready to start using solar energy full-time. After completing the setup, the system needs to be inspected to ensure it meets all local standards for proper operation.

Your solar energy system is built to last a long time—potentially as much as 30 years. Generally, it won’t require too much in the way of day-to-day maintenance, but occasionally solar inverters may experience mechanical issues that could require some minor repairs.

Where can solar panels be installed?

The most common place for the installation of solar arrays—especially for homes—is, of course, on the roof. That’s where most sunlight hits.

Homes where the roof isn’t accessible or doesn’t have the space to accommodate a solar array, still have other options for a proper solar power setup.

Businesses (and in some cases homes) also have the option of installing ground-mounted solar panels, which are built in much the same way a fence is constructed. Ground-mounted solar panels are situated apart from the main office or living space, held in place by a racking unit and connected to the electrical inverter just the same way as rooftop or other surface panels.

Solar energy is a versatile, easily managed, increasingly affordable, and efficient means of alternative energy for homes and businesses. When deciding to get residential or commercial solar power in Denver, home and business owners may want to think about:

SunTalk Solar has years of experience installing commercial and residential solar power in Denver. Contact us to find out how we can bring the clean, effective energy of solar power to your business or home.

The Cost of Energy and Solar Power in Denver, CO

How much is a solar panel in Denver, CO, anyway? As much as you may want to reduce your impact on the environment, the overall cost is more than likely the most significant determining factor in whether or not you switch over to solar energy. If you simply can’t afford it, then there’s only so much you can do about your home’s carbon footprint.

The good news is that solar panel efficiency continues to increase year after year. With that increase comes a reduction in the overall cost of installing a solar energy system. Prices have fallen substantially over the years, with a steep 60% drop in the past decade alone. Industry experts expect the cost of solar panel installation to continue this decline for years to come.

There are many variables involved in determining the specific cost of your solar energy system. While that is a significant investment for most people, you will eventually make that money back from what you save on utilities. Not only that but there are also many incentives—such as tax exemptions and tax credits—that can help you save on the overall cost of your solar panel installation. And with net metering programs, you can potentially start earning money off of your solar power system. For more information, read the above incentives section.

The sun is our most dominant energy resource, and there is no better time to start harnessing that power for the benefit of you and your family than right now. SunTalk’s solar panels offer affordable, dependable electricity that can leave you with more cash in your pocket.

When you’re ready to talk rooftop solar, contact us for a free quote. We are committed to offering you the best local solar power services in all of Colorado.

Hear from our Customers
The crew did a terrific job on the installation at my house. Their attention to detail was very evident and much appreciated. The system looks great
Matt M.
Just wanted to pass along the kind words from Anne I. She was raving about the crew and said they were absolutely amazing, and she wants to bring you all cookies :) She is so happy with her installation.
Installation Partner
Your team was very good at making sure I understood the system and was consistent about leaving the yard spot free of debris. Great job and they deserve kudos on a job well done!
Stacy D.
SunTalk Solar
9900 E. 51st Ave. Denver, Colorado 80238
Main Phone: 303.904.2268 Cell Phone: 720.295.9180
CURRENT JOB OPENINGS
Copyright 2016 Sun Talk Solar | All Rights Reserved | Powered by JEMSU™ | Privacy Policy